What Happens to Life Depends Entirely on Us 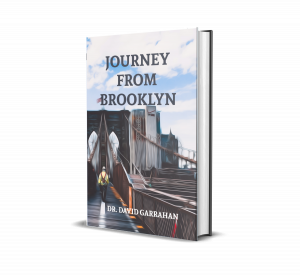 Journey to Brooklyn, a book by David Garrahan

It is rare that one comes across an authentic 80 year compelling history of a person overcoming adversity , and go on to major accomplishments. ”
— Amazon Book Review

RED DEER, ALBERTA, CANADA, June 8, 2022 /EINPresswire.com/ -- "I love you, but I am going to kill you now...don't worry, you are good children and you will go straight to heaven," are words no one wants to hear. Especially coming from your own mother.

It might seem like the typical rags-to-riches story, except for the part where the author’s mother chases him and his sister with a butcher knife intent on killing them.

In his book Journey to Brooklyn, Garrahan talks about how he was born into a dysfunctional family in the early 1940’s consisting of an absentee alcoholic father and a mentally unstable mother. Most of the time he had to fend for himself, sleeping in churches and even stealing food just so he could eat.

But he also wanted to make an honest living, so to put on the table and make the household’s $17 monthly rent he sold newspapers and shined shoes in Brooklyn.

Then in 1952, his mother sits him and his sister down at their kitchen table, tells her she loves them but she has to kill them, and that they should just let it happen because they will go to heaven.

Eleven blocks later his mother is subdued and is later committed to the Brooklyn State Hospital for the Criminally Insane where she will stay for nine years.

With nowhere to go Garrahan wanders into the Larchmont Yacht Club where he gets hired as an ice boy. Observing his great rapport with the club members, the manager encourages him to apply for college.

What happens after that? Well, you should read the book to find out.

If you think you had it bad, think again. Garrahan started with nothing and now he is one of the most successful people in the country. And he did it without any help from those who were supposed to provide for him.

This book is not meant to be a tear-jerker, it’s meant to make you appreciate what you have in life and also to spur you into action if you think your life isn’t going the way you want.

“It's certainly a book that others should read to gain inspiration and to understand the power of two words, Journey to Brooklyn, and how the meaning of just those two words alone could impact their own lives,” one reader says about this book.

This book as well as other titles will be featured in the Toronto Book Festival on June 11 and 12 this year.

David Garrahan has earned credits at seven colleges, including a master’s degree from Lehigh University and a doctorate from Columbia University. But it seems those are not enough, he still studies and write about different articles, but mostly about substance abuse.

His other books include from Brooklyn to Kingsport, Transition America, and Brooklyn Bred. He has twice been recognized for achievement in White House Rose Garden ceremonies.