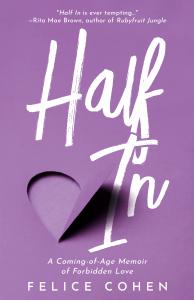 Cover of the new book "Half In: A Coming-of-Age Memoir of Forbidden Love" 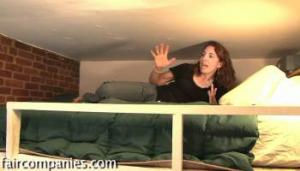 In time for Pride month comes "Half In," a coming-of-age memoir that Rita Mae Brown, author of "Rubyfruit Jungle," calls "Ever tempting."

This book began as a therapeutic exercise after the first love of my life had died. I was forced to mourn her exactly as I had loved her: in secret.”
— Felice Cohen
NEW YORK, NY, UNITED STATES, June 15, 2022 /EINPresswire.com/ -- Felice Cohen, the woman who captured the world's attention by living in one of the world's tiniest apartments is telling an untold secret she's kept for 30 years—at 23 she was in a secret lesbian, age-gap, love affair with her 57-year-old boss.

"Half In: A Coming-of-Age Memoir of Forbidden Love" is a unique coming-of-age memoir—as compelling as a novel—about Felice, then 23, who, like other recent college grads, is hesitant about entering the real world, with the added stress of coming out in the early nineties.

Focused on how to land a full-time position as a writer, falling in love was the last thing on her mind. But fall in love she did.

Felice and Sarah embarked on a high-stakes, year-long love affair. Addicted to the high of first love, Felice was enthralled by Sarah's attention and content to hide their love in the shadows. Sarah, meanwhile, threw caution to the wind, risking her comfortably established life that included a prestigious job and long-term girlfriend.

In this candid memoir, Felice chronicles the happiness and heartbreak of an age-gap love affair while struggling to figure out the direction of her future.

SELECT ADVANCE PRAISE FOR "Half In: A Coming-of-Age Memoir of Forbidden Love"

- "I could not put this memoir down." —Jodi S. Rosenfeld, Author, Closer to Fine

- "'Half In' is ever tempting." —Rita Mae Brown, author of Rubyfruit Jungle

- "'Half In' is a top recommendation not just for LGBTQ collections, but any library strong in either coming-of-age stories or memoirs about age-disparate love." —D. Donovan, Senior Reviewer, Midwest Book Review

- "I couldn't put it down and strongly recommend you pick it up. I'm all in with 'Half In'." Lucy J. Madison, Author, Personal Foul

- "Filled with sparkling conversations and haunting encounters, this page-turner seeks to enlighten as well as pay tribute to a once in a lifetime love." —Booklife

ABOUT THE AUTHOR
Felice Cohen, known nationally and internationally as the woman who lived in one of the world's smallest apartments, is the author of "90 Lessons for Living Large in 90 Square Feet (…or More)" about her experience living for five years in a 90-square-foot NYC studio, and "What Papa Told Me," a memoir about her grandfather, a Holocaust survivor. Her books have sold around the world thanks to a Youtube video of her in her in her tiny studio apartment that has over 25 million views. Felice has been featured on Good Morning America, NBC, CBS, NPR, Time, Globe & Mail, New York Daily News, the Daily Mail and more.