World Changer Cameron Clarkson Defies All Odds, Kicks A Drinking Habit and Teaches the ‘ABC’s of Chess’ to D.C. Youth 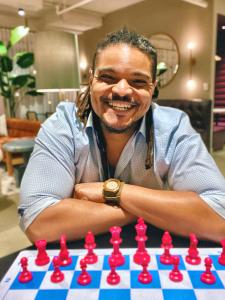 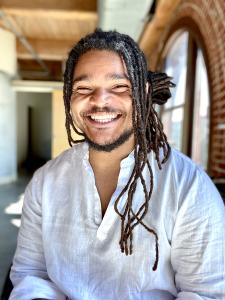 WASHINGTON, DC, UNITED STATES, December 13, 2021 /EINPresswire.com/ -- Howard University graduate, Cameron Clarkson is an author, entrepreneur, artist, activist, blogger, and small business consultant who is the founder of Bottomless Book Sales, a coaching service for authors who want to automate and scale their sales. In October of this year, Cameron penned a new book, “The ABCs of Chess: Handwriting Practice Workbook” for children ages 3-6, focuses on his newfound passion for the game of chess. Two skills are taught, simultaneously. Kids learn to trace a letter from the alphabet thus perfecting their penmanship while learning a new “chess term” that starts with that particular letter. These new terms will be used later while playing the game.

Cameron is a true success story. As a teenager Cameron was the victim of abuse, bullying and taunting. His case which gained national attention, exposed the sexual abuse he suffered at the hands of a female teacher. As in many such cases, race and entitlement played a big factor and Clarkson, then a young teenager was vilified instead of the adult teacher. The one-time high school football phenom turned to alcohol to lessen the sting of the trauma. There were many dark days but today Mr. Clarkson credits chess as the vehicle, which helped him to break his drinking habit. He is now happy to say that he is living a very profitable life of sobriety. Once down and out, Cameron has overcome his hurdles and is giving back to his neighborhood. Through “The ABCs of Chess: Handwriting Practice Workbook” Cameron is reaching kids all over the U.S.

Cameron’s community mindset and his love of chess has led him to open up a chess program (King Hunters) for adults and kids alike, where they are taught the intricacies of this ancient game. By studying chess and learning its principles, individuals begin to formulate a more disciplined lifestyle, which will benefit them personally and have a positive impact on society.

According to a recent article of Chess.com, “chess teaches children from an early age that their choices have consequences—both good and bad. Thinking your moves through and trying to play the best move that you can is rewarding while playing too quickly and rushing your decisions can have negative repercussions. Chess can help you to think ahead, not rush your decisions, and weigh the pluses and minuses of your choices. This correlates to challenges we face in everyday life, and just as in chess, we try to make the best choices to develop positive outcomes for our lives.”

Cameron is gaining applause from and recognition in the chess world, “This book is AMAZING and so needed! There is nothing like this in the world that I have seen before. I recommend this to parents, coaches and anyone who wants to inspire young people to play chess.” International Master Oladapo Adu

Cameron continues to make his mark in the Washington, DC area by opening up venues that will help to keep the young people off the streets. King Hunters Program is for the chess novice as well as the seasoned player. King Hunters Program offers a safe, friendly environment to learn the game. The sessions are designed to be instructional and challenging. Cameron states, “I want to use chess to build communities and help other people reach their potential.”

Cameron Clarkson
ABCs of Chess
+1 202-858-6643
info@cameronclarkson.com
Visit us on social media:
Facebook
Other