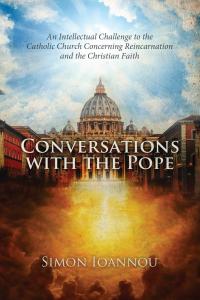 Conversations with the Pope AUSTRALIA, December 21, 2020 /EINPresswire.com/ -- The late Simon Ioannou was a proponent of changing Catholic Church doctrine to support the belief in reincarnation. His novel pushes for this advocacy and presents a persuasive body of historical facts and religious arguments, all within an entertaining narrative framework following a journalist who engages in "Conversations with the Pope."

Albert Magnusson is an Australian journalist with a keen interest in religious affairs and receives the distinction to visit the Vatican and speak with the Pope for six weeks. There he engages in conversations with the pontiff, and this serves as the author's framework to present the arguments for reincarnation. The protagonist gives his arguments and requests the Pope to have the Church make a renewed examination.

"Obviously, any decision by the Roman Catholic Church to adopt reincarnationist elements, which do not conflict with Christian dogma, would be a revolutionary and pivotal development in the history of Christianity." Ioannou said.

Aside from the attempt to reconcile these differing religious viewpoints, the author also provided a chilling dive into contemporary Vatican Curial politics. Ioannou depicted the attempts by conservatives there to avoid serious religious changes, such as those regarding the ordination of women and alterations of the power within the hierarchy should Catholicism and reincarnation be reconciled. Ioannou depicted a contemporary conservative papacy attempting to reverse the liberalizing reforms sparked by the Second Vatican Council.

About the Author
Simon Ioannou was born in Athens, Greece, and migrated to Australia with his parents at the age of seven. He was brought up in Melbourne and graduated from Monash University in economics and mathematics. He worked as a research economist and statistician. However, a love of film took him to London, where he graduated from the London International Film School.

Film-maker, writer, television presenter, he also held positions with the Film Censorship Board and, for more than ten years, worked in a senior capacity with the SBS Television Network. In 1984 he was at the centre of a widely-publicised and successful challenge in the High Court of Australia, as a result of which the protection of natural justice was extended to thousands of non-permanent federal public servants.

Becoming interested in Catholicism in 1977, he researched deeply into its history and theology, as well as the spiritual relations between Christianity and other faiths. He entered the Catholic Church in 1980, and was a Council Member on the Australian Catholic Social Justice Council, a national body advising the Catholic hierarchy on matters of justice and development.

Driven by a passion for justice and the law in general, he practised as a barrister in the last ten years of his life. He died in December, 2012.

Raising Humans With Heart: Not a How to Manual

our kids are always watching us. Let's focus on what’s important: who WE are and how that affects our relationships with children.