As a child in suburban Connecticut, intrigued by hidden waterways and secrets buried in the soil, Donna Goodman dreamed of continuing her exploration of nature in faraway places and sharing the magic of water with everyone, everywhere. Decades later, she began work as an educator at the United Nations in New York, teaching peace through science, using magnets and rainbow glasses to help people see the unseen in their own worlds.
In 2002, her dream came true when the UN asked her to write a book about water around the world, Every Body Counts and Every Drop Matters. Soon after, she received a call from UNICEF, asking her to develop an online interactive online game called Water Alert! for kids. Since that time, Donna has been a champion of the rights and participation of child and young people in the environment sector for more than 25 years. She was a Program Advisor for UNICEF in Water, Environment and Sanitation as well as Climate Change for 10 years and is the Founder of Earth Child Institute (ECI), an international NGO working with young leaders in more than sixty countries. ECI serves with Special Consultative Status to the United Nations Economic and Social Committee and UN Framework Convention on Climate Change.
In the private sector, Ms Goodman’s work has been published by McGraw-Hill, Turner Broadcasting for Cartoon Network and MTV through production of a documentary special program entitled ‘Water for Life’ featuring Jay-Z. Eager to reach more girls in more countries, Donna accepted a position as Global Program Director of Swarovski Waterschool, Swarovski’s cornerstone community development program bringing water education and stewardship to schools on the major great rivers of the world, including the Amazon; Danube; Ganges; Yangtze; Mekong; Nile; and Mississippi. Finally serving as Executive Producer for a documentary film, entitled Waterschool, now available on Netflix,
Feeling an urgency fueled by our rapidly changing world, Donna sought to reach more kids in the most fun and stimulating ways. This was the spark of the idea for a series of action-adventure middle-grade novels intended to inspire young readers to awaken their unique talents, within a global thrill of magic and miracles hidden in every form of life on Earth. Noting that most popular magical, action/adventure series are led by boys, Donna was inspired to create young female leaders From US to Malawi to Laos to India and to Brazil… all in book one, to forge a path of curiosity, courage to care and skills to take action!
Donna first introduced ECOMASTERS to the world, in a blog post through her role as ‘Moderator’ for the North American Association of Environmental Educators, K-12 group; and as Keynote speaker to the 2019 International Conference for Education for Sustainability in Delhi, India. Most recently, 5 June 2020, World Environment Day, she unveiled her plan for re-imagining global education in a post COVID-19 world as part of a global webinar organized by the Mobius Foundation. 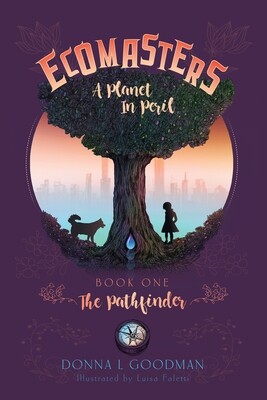